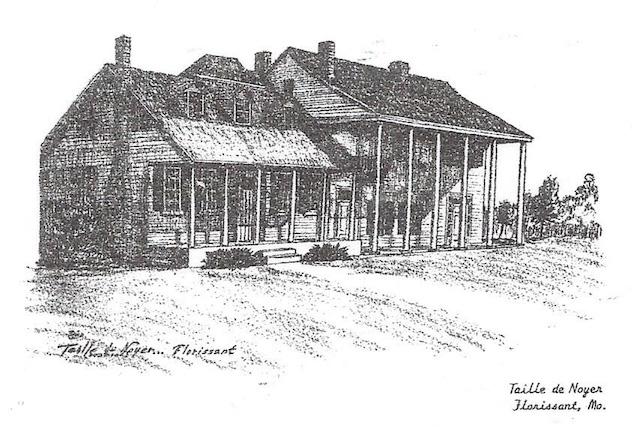 The Florissant Valley Historical Society is a 501(c)(3) nonprofit founded in 1958 and today is housed in the historic Taille de Noyer house located on the campus of McCluer High School in Florissant, Missouri.

In 1960 when the property was acquired by the Ferguson-Florissant School District for the expansion of McCluer High School, the Florissant Historical Society arranged for preservation of the historic home and raised funds to move the structure 200 yards to a new location. Members of the Historical Society, enraptured by the beauty and rich lore about the house, began restoration with limited funds and donations of time and materials from labor groups, civic organizations, local business interests as well as school children.

Two bedrooms upstairs and two rooms in the newer wing downstairs were opened to the public in December, 1965. A year later two additional bedrooms and a nursery were restored and furnished. A museum and country store exhibit were established in the basement where rough-hewn original logs are visible to visitors.

Jane Chambers was the first lady of Taille de Noyer. She was born into fabulous wealth and married into even more wealth. She lived a pious and luxurious life.

Lucy Chambers had no connection to Jane or to Taille de Noyer. She was an enslaved woman in Texas, who was interviewed for the WPA Slave Narrative project that included having her picture taken. This picture. Today, it is in the Library of Congress.

The enslaved people at Taille de Noyer are not named, beyond a single church record where two of them were married in 1833—Daniel and Luci.

So the photo of the emancipated Lucy Chambers will represent the enslaved Luci, and her husband Daniel, and the many unnamed persons who lived and worked at Taille de Noyer.

Maintaining a historic property is a never-ending task. It takes many hands. Understanding all of the property's history is also a continuous undertaking. We are always learning more, researching more, and sharing more about BOTH of Taille de Noyer's stories. We need you. Would you like to help us?

Become A Member Make A Donation