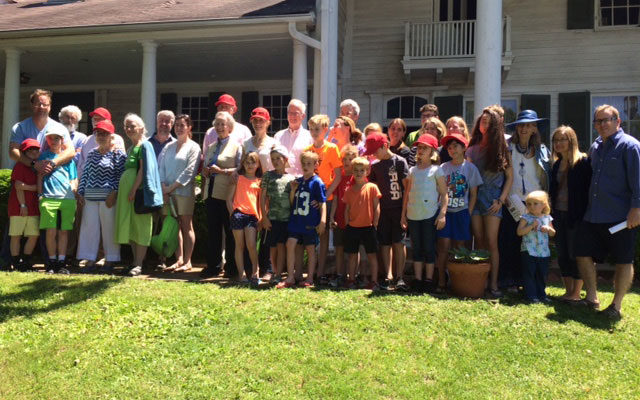 On May 29, 2017, thirty-five descendants of John Mullanphy had an opportunity to visit Taille de Noyer. For one of those individuals, Alicia Cooke Salter, it was a homecoming. Alicia, who is British by birth, lived off and on at Taille during the summer months between 1940 and 1943 when she was aged five through eight. Alicia is a great-great-great granddaughter of John Mullanphy.

In 1905 Alicia Chambers, daughter of Mary Delphine and Joseph L. Chambers, married a British Army Captain named Claude Chichester and they settled in England. Alicia and Claude had two daughters, Delphine and Joan. Both women married. Delphine became Delphine Petre and Joan married Ronald Cooke, who was a Colonel in the British Army.

The five of them moved to the home of Alicia’s mother, Mary Delphine Chambers, at 4969 Pershing Avenue near Forest Park. The Petre children (Charles, 4, and Robert, 2) were originally too little to attend school, but Alicia Cooke went to the City House School run by Sisters of the Sacred Heart. The school was originally founded by St. Rose Philippine Duchesne.

By this time, Taille de Noyer was owned by Sarah, sister of Alicia Chambers Chichester, and Julius Polk. Alicia Chamber Chichester had earlier sold the home to her sister. The children along with their grandmother would visit Taille on summer holiday and weekends. Alicia Cooke remembers a wonderful welcome by her American family. She was given all sorts of treats and ice cream, items that were not available at home at the time and she remembers the house.

She, Charles and Robert would sleep outside on the right-hand side of the home on a large deck in the hot weather. The deck was covered with wire netting. Sarah and Julius also had a big garden as Julius was a great gardener. She remembers there was a long pergola with lots of flowers and ferns. One of Sarah’s daughters, Grizelda married Lemoine Skinner Jr. at Taille on July 5 1941 and Alicia Cooke along with Charles and Robert preceded Grizelda and her father down the aisle.

In 1943 there was a lull in the war and the children were ready to return to England. Unfortunately their grandmother Alicia Chambers Chichester was left behind. Alicia, Charles, Robert and their nanny boarded a Spanish ship in New Orleans home. The ship was full of children returning to the United Kingdom and unknowingly six German soldiers who planned to take it over. The Germans were determined to put the children into a concentration camp. Fortunately the Germans were captured and become the prisoners. The ship made a detour to Trinidad to offload the Germans before continuing on to Lisbon. They were then transferred over the channel by plane to home. Alicia was surprised when returning home where she had left a six-month-old brother to have three boys in his place.

Alicia said that Taille has been beautifully kept since leaving the Mullanphy/Polk family. She thanked the Florissant Valley Historical Society for delightfully maintaining it.