FVHS Publishes a New Book on Slavery in Florissant 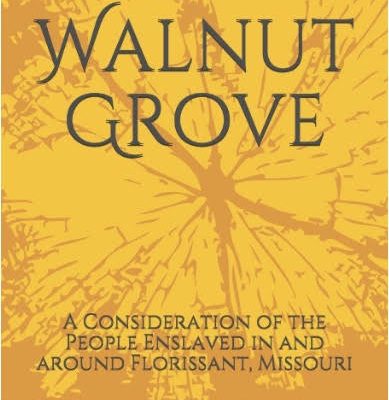 The Historical Society is very pleased to announce the release of a new book that examines slavery in Florissant and St. Ferdinand Township, as well as the segregation and discrimination experienced by African Americans in the century-plus since.  The book is titled In the Walnut Grove:  A Consideration of the Enslaved People in and around Florissant, Missouri.

St. Ferdinand Township had a considerable amount of slavery activity.  It was associated with many of the prominent names in Florissant and many prominent landmarks.  John Mullanphy made his fortune on southern cotton harvested by enslaved persons.  The Jesuits enslaved people, and the Society of the Sacred Heart depended on enslaved labor too.  The founding family of St. Louis, the Chouteaus, had land and enslaved people here.  Though difficult to read, William Wells Brown’s Narrative tells of the hardships and tragedy endured by the enslaved in the township.  Even the Dred Scott case had a connection here.

The society wanted to produce this book as a way of acknowledging the role slavery played at Taille de Noyer (which translates loosely to “Walnut Grove,” hence the title).  The first essay examines John Mullanphy and Charles Chambers as slaveholders.  The book also examines the slavery elsewhere in St. Ferdinand Township–the Graham estate, the Jennings estate, the Chouteau estates, and more.  The book reproduces census and church records, with the hope that it can be a resource for people trying to find their Florissant area ancestry. 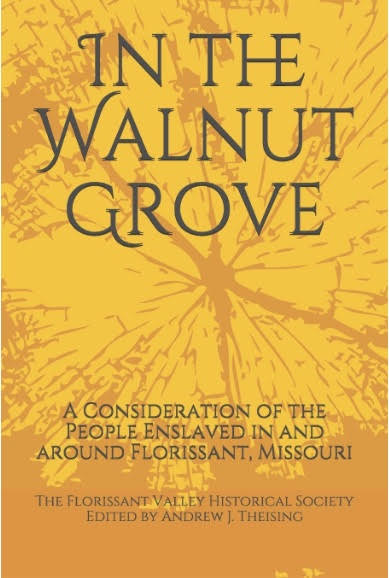 The book started from the series of articles run in the Florissant Valley Quarterly publication.  After the Pulitzer Prize-winning “1619 Project” appeared in the New York TImes, the Society began an year-long examination of slavery in the area.  The series of essays and notes are reproduced in the book, as is an extensive amount of new research that has never been published before.

The 178-page book contains essays, articles, and reproductions of important documents.  It has a surname index as well as a series of meditations–poetry, individual stories, and quotes from history.  It tells the history of African American settlements, such as Anglum and Kinloch.  It covers the time period up to the Ferguson uprising after the death of Michael Brown.  The book’s release coincides with the establishment of a new permanent exhibit at Taille de Noyer on Black History.

The book sells for $16.95 and is available on Amazon.com or through the historic preservation groups–book signing events for the holidays will be announced and author talks will be lined up for Black History Month.  Watch the FVHS Facebook page for details.